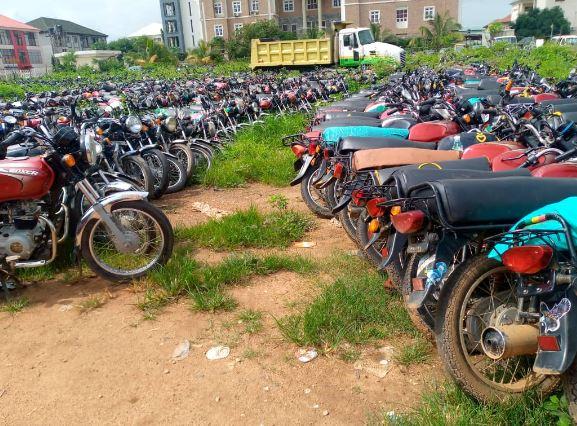 The Federal Capital Territory Administration FCTA has stepped up efforts to restore the Abuja Master Plan, with its Taskteam on City Sanitation removing 3,197 illegal structures and crushing 1,292 commercial motorcycles within two weeks.

In particular, a total of 123 illegal structures were removed in Katampe Extension and Guzape districts, while 3,074 slums were removed and evacuated in Durumi I, II, III, Monkey Village, Dagba, the illegal IDP camp in Durumi district and under some bridges in the Federal Capital City FCC.

Also, no fewer than 1,292 commercial motorcycles were seized in areas where their activities are prohibited and then crushed in accordance with an obtained forfeiture order.

At a press conference Wednesday in Abuja, Executive Secretary of the Federal Capital Development Authority FCDA, Engr. Shehu Hadi Ahmad said the exercises were aimed at ensuring the safety and security of all FCT residents and maintaining a high standard of living without threats.

Ahmad said that the task team has mobilized all necessary resources (human and material) and started to remove such identified nuisances leading to the successes achieved between December 9 and 22, 2022.

He noted that the FCTA is deeply concerned about the increase in illegal developments in some parts of the FCC, the blatant disrespect for the ban on operating commercial motorcycles, and the proliferation of slums and illegal settlements under the guise of internally displaced persons ( IDPs) had observed. ).

He explained that the most affected districts with such illegal developments are Guzape, Katampe Extension and Lugbe Airport Road. Areas with shanties under the guise of IDPs include Durumi, Wasa, and Kuchi Goro.

“Areas with disruptive activity from commercial motor activities include and are not limited to Airport Road, Durumi, Kubwa, Asokoro Extension and Guzape Districts.

“Such concerns undoubtedly exacerbate security challenges, erode the city’s aesthetics, and conflict with the City’s approved Master Plan, which invariably creates bottlenecks in the City’s management.”

The FCDA boss recalled that the FCTA management, under the leadership of the FCT minister, Malam Muhammad Musa Bello, determined to deal with such anomalies and restore the citizens’ confidence in the administration, directed him to other departments and lead stakeholder agencies to ensure such anomalies are addressed head-on. addressed.

Others include; Resettlement and Compensation, Directorate of Road Traffic Services, Abuja Environmental Protection Board, Parks and Recreation and Chief Security Officers (Police and DSS) to FCT Minister, who duly identified all affected sites and outlined a strategy for effective removal of such illegalities.