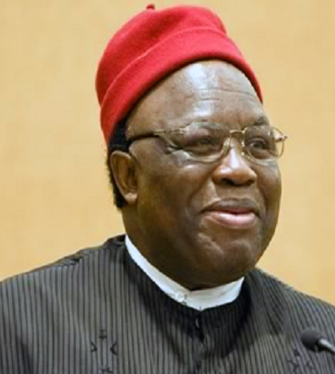 Kalu extolled the virtues of the late envoy and emphasized that Obiozor made invaluable contributions to building the nation in various capacities.

Kalu noted that the late diplomat was a nationalist passionate about Nigeria’s growth and progress, adding that his wise counsel and intellectual contributions to the global discourse will be sorely missed.

In his tribute to the late Obiozor, which was made available to Vanguard in Abuja on Thursday morning, the former governor emphasized that the deceased was a rallying point for his contemporaries and the younger generation, many of whom seek counsel and advice from him.

He said: “It is with a heavy heart that I mourn the passing of the President General of Ohaneze Ndigbo, Prof. George Obiozor.

“The envoy’s passing is a great loss to Nigeria and the international community given the robust role the late diplomat played at sub-national, national and global levels.

“His intellectual contributions to the global discourse have been enormous and deserve praise.

“The personal qualities of the deceased were based on honesty and fairness.

“He was a strong advocate of a fair and ideal society, anchored in credible leadership and good governance.

“The late president general lived a life of purpose and left remarkable legacies to honor his family, loved ones and leaders.”

Kalu felt sorry for Ndigbo, the government and people of Imo State as he prayed to God to grant eternal rest to the late statesman.

The message that Obiozor left a legacy for Nigerian leaders to uphold — Orji Kalu appeared first on Vanguard News.

Soludo to FG: Release Nnamdi Kanu, I want to stand surety for him