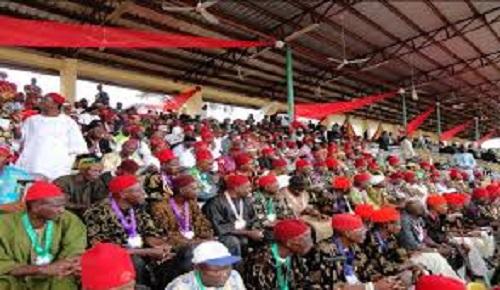 Participants in Igbo International Christmas Retreat organized by
Igbo Think Tank and Nzuko Ndigbo have said that the election of a Nigerian president of Southeast extraction in 2023 would not only restore peace to the zone, but also quell the rising agitation for self-determination championed by youth from the zone.

This is stated in a communique issued at the end of the retreat
Held Wednesday at Aguiyi Ironsi Conference Center, Umuahia, Abia State.

According to the communiqué jointly signed by the Chairman of the Board of Trustees of Igbo Think Tank, Professor Madubuike Ezeibe; and Nzuko Ndigbo’s president, Chuks Ibegbu, supporting the Southeast to produce the successor to President Muhammadu Buhari in 2023 will be in the general interest of the country.

The communiqué urged Nigerians to vote for a competent presidential candidate from the south-east, in accordance with the zoning policy adopted to have peace during the turmoil in the south-west caused by the annulment of the June 12, 1993 presidential election , which are believed to have been. won by Moshood Abiola.

“Electing a Nigerian president from Igbo extraction in 2023 will make it impossible for agitators to convince youth to join them and give us peace in the Southeast, as happened with NADECO in the Southwest in 1999,” read part of the communiqué.

During the retreat, it was noted that the zoning of the presidency was aimed at ensuring fairness and justice for a peaceful existence, and it was questioned why the two hitherto leading political parties in the country suddenly decided to jettison the zoning when it was South East’s turn to produce the next president.

It noted that since every geopolitical zone in Southern Nigeria, except Southeast, had produced the president, fairness and justice demand that power go to Southeast when it leaves the North in 2023, which it holds for eight consecutive years.

The communiqué went on to say: “It was expected that the 1999 scenario of leaving the presidential contest to only people from the deserving zone should have been repeated for the Southeast in 2023, but the withdrawal went even further to allow current presidential candidates to merit and came to the conclusion that the only Igbo male among the frontrunners is still the best based on verifiable character, age, intellectual capacity, physical health and past.

“So to be denied the opportunity to lead his country would suggest that the Igbo are not seen as equal Nigerians.”

The retreat adopted by Labor Party presidential candidate Peter Obi enlisted the support of all progressive Nigerians of all ethnic, religious and political backgrounds to vote for him in 2023 for a new Nigeria where “production will replace consumption” .

It further urged stakeholders from several states to show their support for Obi, urging voters to vote for several competent candidates from other parties in each state that adopts Obi in other elections.

“PvdA candidates who may lose because of this appeal should be rewarded with nominations by Peter Obi,” it said.

The retreat further advised Obi that if elected president in 2023, form a government of national unity instead of the usual “winner takes all”.

The communiqué also called for the immediate creation of an additional (parity) state for the Southeast as recommended by the 2014 National Conference to align the zone that has only five states with others with six except Northwest with seven states .

“Leaving the Southeast with only five states and 95 LGAs amounts to marginalization and helps the agitators in their campaign.”

The retreat noted that the frequent attacks on Igbo living in other parts of Nigeria and their business interests were due to jealousy “exacerbated by the attitude of some Igbos who are arrogant and boastful”.

It therefore decided to implement a policy that would see most Igbos stay at home while also drawing other Nigerians into Igbo land for investment.

He said that “Obi has a track record of performance”, having shown capacity and competence over other contestants.

Isiguzoro argued that it would be unfair to allow a Northerner to succeed another Northerner in a multi-ethnic country like Nigeria.

So he implored Ndigbo and all progressive Nigerians across the country to pick up their permanent voter card, PVC, and vote in Obi for a better country.

“Anyone who has suffered from the misrule of APC and PDP since 1999 should join current efforts to change the narrative by voting out anyone who thinks Nigeria is their estate or birthright.”

The retreat, which was the fourth edition, was attended by people from Igbo speaking states, including Delta State.

According to the organizers, the first edition of the retreat was organized by Dr. Ogbonnaya Onu in Uburu, Ebonyi State; second edition organized by Professor Pat Utomi in Igbouzor, Delta State; and third edition, Dr. Nwachukwu Anakwenze in Abagana, Anambra State.

The post ‘Supporting S’East to produce president in 2023 will quell agitation’ appeared first on Vanguard News.