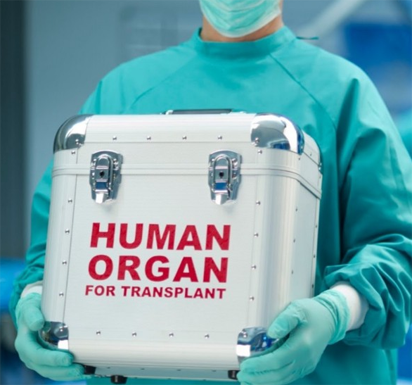 •How 2 teenagers sold their organs for N200,000 without their parents’ consent

MIRACLES, they say, will never end, as two teenagers left Lagos for Abeokuta in Ogun State to sell their organs for N200,000 without their parents’ consent.

Vanguard has reliably gathered that the two teenagers, 17-year-old Precious Ikechukwu, daughter of the bishop and founder of Living Word Anointed Gospel Mission, based in Iyana-Ipaja in Lagos, Ikechukwu Umeayo and her father’s secretary, 19- year-old, Theresa Obam, allegedly conspired with a church member, Mrs Adeleke Blessing, who took them to a doctor two months ago at the Redwood Specialist Hospital, Abeokuta, where their organs were sold for N100,000 each.

It was suspected that Mrs. Adeleke was staying with her mother-in-law in the yard where the church stands and often attends the church’s vigil.

The secret they were hiding was blown open on September 12, 2022, when Bishop’s daughter Precious started vomiting. She was taken to hospital by her father, Ikechukwu Umeayo, who thought it was typhoid or malaria.

The doctor requested a medical test, which later revealed that her anus and genitals were damaged.

It was believed that the sick girl told her father that a female member of his church, Mrs. Adeleke, had smuggled her and Theresa to Abeokuta, where their organs were sold to a doctor.

The teens further claimed that Ms. Adeleke convinced them to carry out the illegal act because her father is not paying them enough money and she will take them to where they will be paid lavishly N100,000.

They also claimed that Mrs. Adeleke warned them not to tell their parents and said that if they did she would kill them.

How the transplant was performed

Speaking about how the transplant was performed, the teens said Ms. Adeleke Blessing, also known as Mummy K, smuggled them to Redwood Hospital in Abeokuta, Ogun State without their parents’ consent and conspired with the doctor identified as Dr. Durodola injecting drugs into it.

They claimed they were forcibly taken to a PDF hospital in Surulere, Lagos, where they were also forced.

During the process, their ovaries/eggs/organs were illegally harvested by the doctor without their consent, causing severe pain and bleeding.

Based on the revelations, the ladies were taken to another hospital in Surulere, Lagos, where they were referred to a medical laboratory for examination and scan.

The result revealed that their liver, uterus, urinary bladder, kidney, spleen and gallbladder were damaged due to their ovaries/eggs, approximately (46 ovaries) harvested at the hospital in Abeokuta.

Bishop Umeayo, the father of one of the teens, said when his daughter, Precious, was taken to hospital and the test was performed, her younger children told him they knew their sister was sick because she often went to the bathroom with medical help. equipment and dripping blood came out.

It was further learned that Favor, who was staying with Bishop Ikechukwu, was working as his secretary in the church with a salary of N20,000.

His daughter, Precious, who is a hair stylist, makes Mrs. Adeleke’s hair and gets paid.

Bishop Umeayo, annoyed by the ugly development, filed a report at the Iyana-Ipaja police station.

Vanguard further concluded that the case took on a new dimension when Bishop Umeayo’s lawyer, Ikechukwu Chiaha, suspected foul play on the part of the police, who he believed had compromised on the case, based on disclosure of his client that the detectives were recruiting. for out of court settlement and payment of N300,000 which he claimed the police would collect N200,000.

Based on this, it was learned that Chiaha had subsequently turned the case over to the National Agency for the Prohibition of Human Trafficking, NAPTIP, which has launched a new investigation.

In his defence, the alleged defendant, Ms Adeleke, said: “The two girls volunteered to donate their eggs to the hospital after listening to her telephone conversation with a doctor and in return they were reimbursed N100,000 each.”

She added that Favor gave her N20,000 to introduce them to the hospital.

In response to the accusation of damage to the teens’ organs, the management of Redwood Clinics, Abeokuta, Ogun State, cleared itself of any wrongdoing.

The clinic’s management said in a statement that the two ladies were adults and stressed that they had voluntarily donated their eggs.

The statement entitled: Organ Harvesting story: Our Statement- Redwood Clinics Abeokuta reads: “The two ladies in question, whose names we will not disclose in the interest of patient confidentiality, came to the hospital for voluntary egg donation. .

“Egg donation is an integral part of in vitro fertilization, aimed at helping women with low egg reserves to conceive through assisted reproductive technology.

“Egg donor programs involve self-administration of drugs by the participating donor. Eggs are microscopic and aspiration of eggs is done through a tiny needle, not an organ harvest in any way. Eggs in the human body are similarly lost during menstrual cycles, which partly mirror egg donor cycles.

“FO came to the clinic with BA who had participated in the egg donation program in the past and was introduced as her cousin. FO expressed her desire to participate in the scheme and she later introduced PI, who she claimed was her boyfriend, as a potential donor. Each of them was given a registration and data form to complete on which they wrote down their relevant personal data, including date of birth and age. The information shows that they were both well over 18 years old.

“They were asked questions to ensure they were eligible and fit for the scheme and were given further advice on the treatment protocol. They reaffirmed their willingness to participate.

“Then they were physically examined, after which laboratory tests were ordered.

“It took six weeks from the day of registration to the day of egg collection at PF Clinic in Surulere, Lagos, during which time they injected themselves at home with the prescribed medication for this purpose.

“Her father followed her to the hospital claiming that he was unaware that the daughter had egg donation and that when the pain started they took her to another hospital in their area where she was suspected to have appendicitis and had surgery scheduled.

“It was then that his daughter told him she had undergone egg donation and she was told she might experience abdominal discomfort or pain.

“Because of this, the father brought her to our hospital. We told them that the symptoms were not an unusual effect of the procedure, and they were reassured that no harm would come to her.

“She was treated with pain medication and intravenous fluids and was discharged home the next day in good health.

“As far as we know, she has had no complaints since then and both ladies have remained in good health.

“However, about two weeks after PI’s dismissal, we were informed that the father had lodged a complaint with Meiran police station claiming that his underage daughter and secretary were involved in organ harvesting, and he demanded an amount of two hundred million naira. as damage.

“The case has been investigated by the police and it has been determined that we have not committed an offence. In his case, the case was transferred to the State Criminal Investigation Department, Panti in Lagos and the findings were the same.

“It is pertinent to note that our records show that the ladies were adults and were not harmed as a result of any medical intervention in our care.

“We are proposing to the administration that not a single organ in their body is missing or damaged. Redwood Clinics Abeokuta is a responsible organization that will not commit any act of illegality in its dealings with the public.

“We hold the ethics of medical practice in high esteem and will continue to deliver healthcare to the best of our ability.”

They are not organ harvesters – police

Lagos State Police spokesman David Hundeyin said: “They were not organ harvesters, the surgery was performed by a professional doctor and the process was legal.

“All documents were signed and the girls stated in the document that they were over 18 years old.

“The doctor spent two days telling them about the effects of feeling pain, and they accepted and donated their organs.

“Unfortunately, they have not informed their father about it and the father is asking for N200 million in compensation.”

In response, a NAPTIP official, who spoke on condition of anonymity, said: “I am not aware of the matter. I will ask our people.”