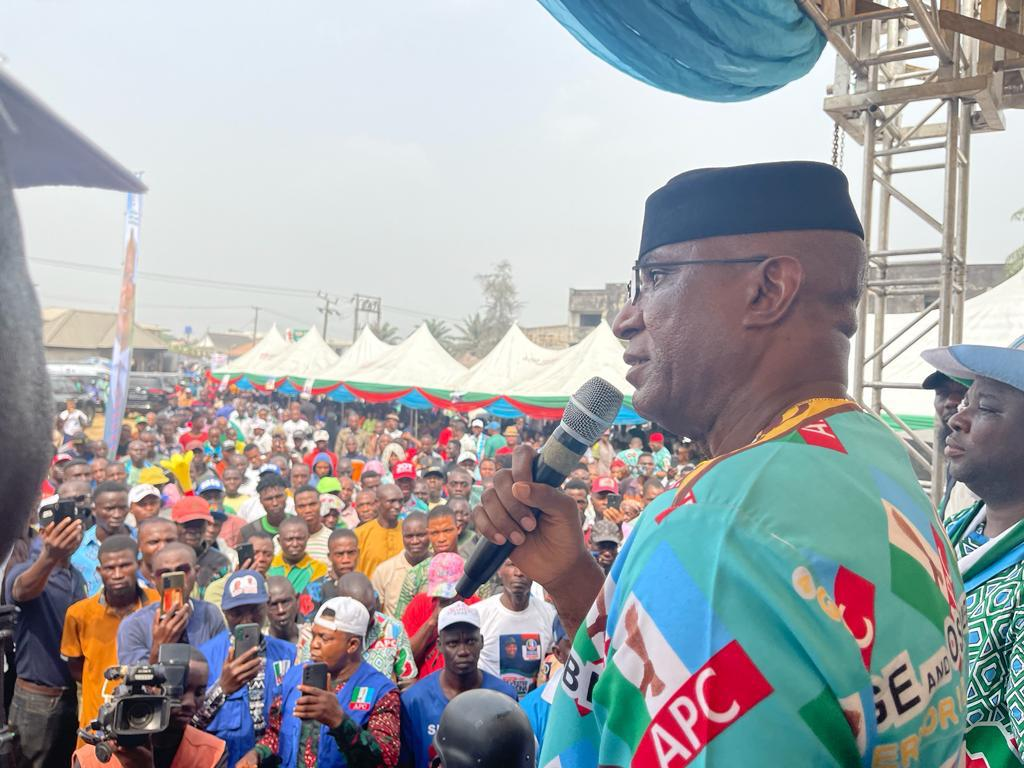 ** the umbrella is torn, says Ilolo, former commissioner of Okowa

A storm of defection has hit the People’s Democratic Party, PDP, in Delta state, while the All Progressives Congress, APC, campaign train hit critical strongholds of the party.

Yesterday during the APC ward to ward campaign in Uzere, the hometown of Okowa strongman Bashorun Askia Ogieh, Ilolo said, “The PDP umbrella is torn. We are fully committed to the cause of the APC and we will win”

In Uzere too, Majemite dismissed the PDP as a group of ‘thieves’. She said that under Governor Okowa, PDP has received N4.2 trillion in seven and a half years, but the state is still undeveloped and penniless.

“They are all thieves. If PDP comes here to campaign, ask them: where is our money? Don’t listen to them until they answer your question,’ she said.

Mr. Goodluck Obrogor, the only brother of Bashorun Askia, was the cynic of all eyes, as he led 177 defectors to denounce the PDP and swear allegiance to APC.

In his farewell address, Mr. Obrogor said that the Uzere people are in the grip of oppression and intimidation and pleaded with the APC Deputy Senate President and Delta State governor nominee, Senator Ovie Omo-Agege, to help them.

“Obarisi, please consider this place your own home and come and free us from the shackles of slavery imposed on us by the PDP,” he said.

Others who backed out were James Miller, former personal assistant to the Delta State House of Assembly Majority Leader; Olotu Ode, youth leader of the Uzere community; Fred Uye, Edafe Agbaka and other members of the Uzere youth movement.

James Igbi, the ADC’s former deputy gubernatorial candidate, led a cross-section of party leaders and elders in Uzere to leave for the APC.

In Aviara, former members of the PDP led by Ureghe John-Mark, an executive member of the Aviara district, tore up PDP cards and also went to the APC.

Speaking, John-Mark said Aviara people have been used and dumped, and they are tired of PDP and have decided to pitch their tent at APC.

Responding to the storm of defections, Senator Ovie Omo-Agege said that the heartfelt decision of former PDP leaders and supporters to ditch the party and embrace APC has brought Bahorun Askia and Okowa a judgment on themselves.

“They need to know that the time for politics of intimidation is over. They know me and I know them. I will not be intimidated.”

He lamented that Uzere, second only to Oloibiri where oil was discovered in Nigeria, still looks dilapidated after more than N4.3 trillion oil revenues generated by Uzere and other Delta oil-producing communities attributed to the state.

“Is this Uzere, the oil-rich producing community? Did you insult Okowa? How could Askia be so comfortable making Uzere people internally displaced during floods? With the resources from Uzere you don’t have to have problems with flooding. Instead of Askia using his office to help his people, he chooses to intimidate them.

“Uzere does not look like an oil-producing community. By the grace of God, when I become governor, I will consult with illustrious natives to ask them what the new government should do for Uzere.”

At Aviara, he told people that Okowa is kidding himself, but he won’t be vice president. Our next president, he said, is Asiwaju Bola Ahmed Tinubu, and our vice president will be Senator Kassim Shettima, both from the APC.

He urged the people of Aviara to come out on election day, stare down PDP and Okowa and vote for all APC candidates. He assured supporters of adequate security on election day and urged them not to fear intimidation from the opposition.

The defectors were received by Delta State APC Chairman, Elder Omeni Sobotie, who described Chief Askia Ogieh’s younger brother as the biblical Jacobian twin who has seen the light and prayed that Uzere would never again experience bad leadership and darkness.